Co-​Artistic and Executive Director Karen Lange talks about PS’ 2013 productions and what the future holds:

This was the year of identity. We didn’t plan it that way — it just happened. Last spring’s Unclear Family Repertory featured characters redefining what it means to be a friend, a wife, a husband, or a mother, as well as who they were as people. Whether they were moving, evolving in their relationships, trying to bond, or trying to mourn, the women in Smudge, Benched, and Bleed were all struggling to keep a sense of themselves amid a swirling, changing world.

And we kept that theme rolling with Cabaret XXXY: Who Do You Think You Are? — the third in our series of hit Capital Fringe musical cabarets. And though it dealt with its title question in a fun, flirty, sometimes irreverent way, it was still honest in its push for self-​examination.

In a way, all of our full-​length shows have been about identity from a woman’s perspective. 2011’s Carol’s Christmas dealt with a woman who opted to disappear rather than move on from heartbreak. 2012’s Killing Women explored whether a woman can work and be a mother at the same time without giving up either part of herself.

2013, however, has focused on Identity in a way we never have before and will continue to do so in this fall’s Bondage, whose leather-​clad leads try to find honest emotional connection by role-​playing many different people. It’s the classic masking and unmasking that is portrayed over and over again in cultures around the world. Are you the mask or are you the person?

In the past, we’ve planned shows in a more or less catch-​as-​catch-​can manner. Scripts have come across our collective desks that we couldn’t resist, and we’ve leapt at them. But this method, while it’s led to some great art, also has us remaining behind the proverbial 8 ball, struggling to select shows, find space, produce, and promote in a much shorter schedule than we want to. We’re growing up — and we need to pick a major so we can graduate to the next level.

Ergo, after Bondage, we’ll be hunkering down to make plans for the shows we will do for the next two years. Two deadlines loom large – applications for Capital Fringe Festival are due in late December. In early January we need to have selected a script for a yet to be announced but very exciting festival in DC. We have several ongoing projects in development, so the strategic planning will include setting dates for those and selecting some scripts to produce. We’re looking at innovative locations, local talent, and provocative topics.

We’re choosing a direction and getting on the road. Stick with us for a great ride.

We are thrilled to announce our next play: This November, Pinky Swear is proud to present David Henry Hwang’s BONDAGE. In a Los Angeles S&M parlor, a dominatrix and her client are clad head-​to-​toe in leather costumes that conceal their faces and ethnicities. These elaborate disguises allow them to play out fantasies based on racial stereotypes and sexual mythologies. Exchanging biting social observations with stinging humor, they progress through their power games to expose the arbitrariness of racially minded thinking. All the while, however, they are haunted by an awareness that in spite of their efforts, they may be moving towards the most terrifying reality of all — a true intimacy that transcends the bounds of race. The production will be directed by Toni Rae Salmi.

In addition to the play, the audience will be treated to an immersive experience in what we are calling our “Lounge.” No more waiting outside the theater when you arrive — you’ll be swept away to a new world the second you walk in the door. Amy Couchoud is leading the Lounge creation team. Come see what she cooks up & what happens when the performance comes to you…

We are equally excited to announce that the production will take place at the brand, spankin’ new (see what we did, there?) Anacostia Playhouse. We are thrilled to support the construction of a new theater space owned & run by women. Anacostia Playhouse exemplifies that art is for everyone, everywhere. They’re embracing the Anacostia community and showing that east of the river is just as crackling with quality entertainment as the west side. Come on down and celebrate the new space, see our show, and look at what these women have made possible. That’s what we call walking the walk.

Tickets: watch this space — tickets will go on sale in mid-​October

To say I am sensitized to gender dynamics in my plays might be an understatement.

The first full-​length play I wrote after entering grad school centered on two middle-​aged women who had been each other’s first loves when they were teenagers and who were rediscovering each other decades later under difficult circumstances. One had grown up to become an anthropologist, the other the minister of their hometown. One was out and married to another woman; the other ostensibly closeted.

On one hand, I was developing a deeply emotional and physical relationship between two teen girls. On the other, I was navigating a messy intersection of faith, grief, trauma, and sexuality.

And then, of course, there was the child abuse.

I don’t remember who said it, my professor or one of the other students in the writing seminar. But it went something like: “This is going to make somebody mad at you. There’s no getting around it.”

And as a twenty-​eight year old heterosexual male writing about 40-​something gay women, I totally believed it. So I made sure that I could back up every choice I made: from making the maybe-​gay minister the most likable person in the play to opening Act Two with a sex scene between the two teens.

It helped to have a dramaturg wife (then fiancé) completing her MA in Theater History and Criticism with a focus on gender theory that I could bounce ideas off of. It also helped that the first director to work deeply with me on the play was a gay woman around my protagonist’s age who I was confident would call me on any bullshit.

In the bazillion readings and one college production of the play, no one has ever expressed their displeasure about the themes and gender dynamics of the play.

But I think it set a precedent for me of a) writing a lot of gay women and b) making sure I understood the gender dynamics of the stories I’m telling. Not to say that those dynamics are always nice and neat and balanced. But if they’re unbalanced, I like to have a good reason for it.

Their mission is to produce theatre that highlights strong roles for women, as well as provide more opportunities for female theatre artists of all types.

By the time summer 2012 rolled around, the company and I knew each other a little better. And I was thinking, “Hey, they make theatre for women. I write a lot for women. We should really do something together.”

And so I pitched an idea for a play that I could write and workshop with Pinky Swear that, if all the stars aligned, they might produce in the near(ish) future.

They thought it was a good idea, too. And when Pinky Swear created its Associate Artist program this past fall, inviting a handful of local artists to work with them, I joined up. So, not only do I get to write a play for them, but I’ve got a whole slew of actors and other artists to draw inspiration (and potential collaborators) from.

There’s a certain kind of joy that comes from creating a bespoke piece of theatre — something tailored to the make-​up and aesthetic of a particular group of artists.

And there’s a certain amount of pressure.

The play I pitched is tentatively titled THE LAST BURLESQUE and takes place during the final weeks of a failing burlesque/​sideshow house. Right now I’m describing it as a love story between a suspension burlesque artist and the daughter of a dead clown.

The plot is still unfolding (I’m somewhere in the murky middle), but however it plays out there’s going to be burlesque. Maybe a lot of it.

(Also magic, contortionists, human blockheads and, if the permits come through, fire eating.)

I like burlesque for two reasons. a) It’s sexy (duh) and bold and the form encourages creativity and b) It’s all about delaying the reveal. You keep the audience on the edge of suspense for as long as you possibly can. Which can be one of the keys to good drama.

Already several burlesque/​sideshow themes are emerging: the nature of exhibitionism; the comodification of the Other (or, as one character puts it, “the gentrification of the weird); the human body as art; the audience as voyeur.

Which is all well and good. But if all the stars align and Pinky Swear produces this piece, it’s not going to be the metaphors that are twirling tassels on stage.

I’ll be asking actresses (and very possibly at least one actor) to perform burlesque routines start-​to-​finish onstage. And it’s quite likely that I know who those actors and actresses are going to be. They’re the people in the room reading installments of the first draft as I bring them in.

Which really feels like it ups the whole understanding-​gender-​dynamics stakes.

Which is not to say that sometimes theatre can’t use a little tits/​cock/​ass for the sake of it. See? Balance. Hard.

And it’s not like the members of Pinky Swear are naïve about the gender politics of theatre (They’re so not naïve, I’m laughing while I write this sentence). They will call me on my bullshit. Or at least ask firm questions about what the fuck is going on in a scene.

But because they are so smart about gender and theatre, and because that’s a core reason the company came about, that makes me want to not fuck up even more.

This isn’t to say that I’m pulling punches. As soon as I’m done with this post, I’m finishing a chunk of dialogue where a character describes in erotically-​charged detail the sensation of hooks being pierced through her shoulders and back.

Let’s just that when I swing, I’m doing my best to know what I’m aiming for.

Pinky Swear returned to the Capital Fringe Festival in July 2012. 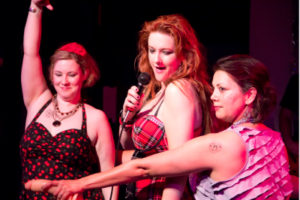 e now basking in the glow of our first full season of programming. It is a good time to be us.

It’s also a good time to be you! The bitches are back and we still have more to say on love, relationships, and our unique view on the world. Expect more belting, more tattoos, more audience abuse (put away the fucking cell phones), more surprises and the addition of a new bitch: company member, Christina Frank. We’re already in the midst of making this an even bigger, more badass show. Don’t miss it or we will hurt you.

Check out an interview we did with the Washington City Paper

What the critics thought:

“Pinky Swear Productions is almost a punk rock version of “Sex and the City”. Four wonderfully different personalities, all genuinely relatable and likable. They all have their faults, but are so confident they, and no one else,don’t  seem to care.